There have been a few posts speculating on the future of VSAN and I for one am looking forward to it with great anticipation. However, I don’t think VMware really know what a hugely transformative technology VSAN could be.

I was lucky enough to attend VMworld 2015 and luckier to be invited to the VSAN pioneer summit, which gave us a real in-depth look at the future of VSAN. I liked what I was seeing but about an hour towards the end of the allotted time I put my hand up and asked why there were no NAS features planned for the future release. I mean it makes sense doesn’t it? Where’s NFS, where’s SMB? I know a linux architect who would love to see this come in.

If you really want to do the software defined storage thing then really go for it. NSX is the current favourite child. its being pushed everywhere, including presence into “competitors” such as AWS. So where’s the love for VSAN? Push this technology and it will really change the datacenter.

What if VMware made a VSAN only cluster, no VM’s allowed only storage exports. This would put them in direct competition with Storage vendors and would greatly reduce the cost for storage in the datacenter and allow for a huge amount of flexibility for businesses of all sizes. lets explore this idea more! 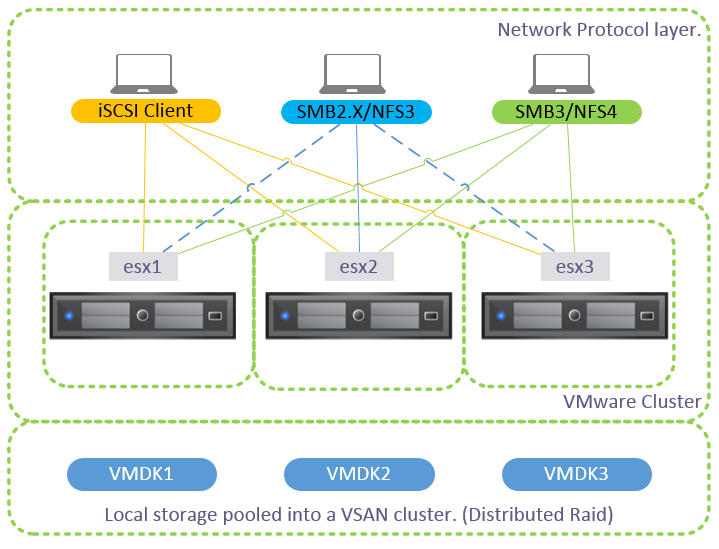 Folders (native on the file system) or VMDK’s

VMDK wins. I would think that using VMDK’s instead of folders would be a much better idea. There would be no real changes needed to the VMFS file system to accommodate a much more granular permission structure that would be required by SMB. ESXi could mount the VMDK and write any file system in there. VMDK’s can be accessed by multiple ESXi hosts.

We already know that NFS4 and SMB3 can take advantage of multiple IP addresses (hosts) to provide multi-channel and VMware clusters are, quite frankly, an incredible implementation of clustering technology. Mounting the VMDK to multiple ESXi hosts would allow the data to be taken advantage of  by NFS4 and SMB3 compliant hosts.

SMB2.x and NFS3 prefer to access data through a single IP address or hostname. Now this is easy to implement immediately but if you want to add a bit more intelligence around it, some kind of construct that has a virtual IP that could move between hosts or something like the virtual IP address technology from Log insight clusters. Easier said than done I know but still should be considered.

Kinda obvious, i know, but redundancy would be taken care of by VMware clustering technology. three or four hosts and that’s that taken care of.

Performance on the other hand could be very interesting topic, a complex topic, but still interesting. I would guess in the thousands of IOPs. There would be many factors to consider. Network speed, controller card, SSD speed, SSD size, and so on and so forth. In a future post I’ll look at this again.

As this is only intended to be a storage service the licensing should be one ESXi-VSAN license (I’ve guessed it to be £1,500 but could be as high as £2,000, which I’ve also given as a cost per TB below)

So this is interesting and I’ve decided to look at a couple of real world examples below.

I have a quote from a major vendor for £198,409.45. This figure gives us 48TB of HDD storage in 64 SAS disks and 9TB of SSD storage in 8 SSD disks (these figures are usable). For this project we decided to use the SSD as a caching layer.  As you would expect from an enterprise storage system it has a good deal of redundancy built-in with 4 nodes to manage the storage and 8 x 10GB Ethernet ports. All in, not bad for the price point and a good system all round.

To get the equivalent amount of usable storage as the popular storage vendors array we’d need 7 VSAN nodes.

So for the costs:

Note 2 : (To be fair) The Storage vendor has extra goodness built-in to accelerate workloads and the hardware will be optimised and custom designed to do nothing but server data.

The above figures, which speak for themselves, are all based on real quotes and would be for an enterprise deployment.

If VMware really wanted this to be everywhere they could address smaller shops by allowing a single node VSAN. Why not; that would allow anybody to get a foot in and expand as their business grows.

So VMware, when will this be a reality for us?

Please let me know what you think and it there are any glaring errors. I’m also happy to discuss any of the above.