Carrying on with my Graylog posts, the following will give you an introduction to creating a basic but functional dashboard.

Why do you need a dashboard? Well you can view a number a widgets very quickly which can all be configured with separate search queries. What’s really convenient is that it’s your dashboard, not one that the vendor thinks you will need. Every environment has different requirements. Perhaps you are tracking iSCSI disconnects and want to see a count of the number of iSCSI errors you are getting prior to the event, maybe want to track how many logs vpxa generates, or list the amount of port scans you are getting on your external firewall. It’s really defined by you.

The above does go through creating a very basic dashboard by once again this demonstrates how useful Graylog really is. If you are looking for log monitoring you will be in a safe place with Graylog. The flexibility and scalability, absolutely compete with, and often exceed, the larger paid for rivals.

As a follow up to my previous post, I’ll go through deploying and configuring the Graylog OVA. It’s really, really easy. if face the whole process should only take about 20 minutes before you have a set-up ready to receive logs.

vSphere will go off and deploy your OVA. The above process will take about 5 minutes.

The Graylog OVA is based around Ubuntu and is configured with DHCP straight out of the box. If that doesn’t bother you skip this step.

Its imporant to note here that the graylog-ctl script is quite versatile and allows you to make chages to Graylog, such as change your timezone and admin password, which should be done if you want to push this into a production environment,. Note: If you do make any changes make sure you run sudo graylog-ctl reconfigure.

OK so to be fair the above took me about 10 minutes to do, however if you are not familiar with Linux it’ll take longer but the Ubuntu community is very active and can help.

So now we have our Graylog server ready to go, well almost. The amount of inputs that Graylog can receive is quite vast. In addition to the preconfigured inputs you can make your own. We’ll look at configuring the most common. the syslog input for both UDP and TCP.

That’s really as difficult as it gets. Now you have the basic features set-up and configured all you need to do is point the infrastructure you want to log at it.

So the previous two posts only really scratch the surface of what is a really powerful tool. Being an opensource project,the code is readily available for anybody to look at. API;s are exposed and documented, dashboards and alerts can be configured, and custom inputs can be setup, to name a few. 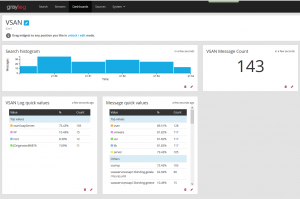