Skip to content
May 21, 2012 ~ Carel Maritz ~ Leave a comment
Once again, I had hoped to blog more this year but as these things happen I haven’t been able to.
However I have been working hard at getting my certs done. I passed the VCAP4-DCA which was an amazing feeling. I had almost given up on the process as it was very time consuming. My wife has been very supportive which has really helped. 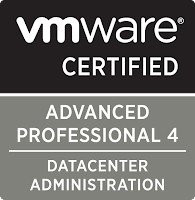